I love the neighborhood where I was born and raised. Hyde Park was and still is a champion of integration and harmony, of people from various income and education levels, all living together in one area, in a city that is famous for its segregation.  An anomaly, quite special.

Hyde Park, for my sister and I, held so many wonders.  We began our educations in Montessori school, and then later we entered William H. Ray Elementary.  We lived in Madison Park and then on Blackstone, near 55th Street.  Our mom, an Alumni of the University of Chicago, gave us access to the Regenstein library.  We used the beautiful campus grounds as our second backyard. 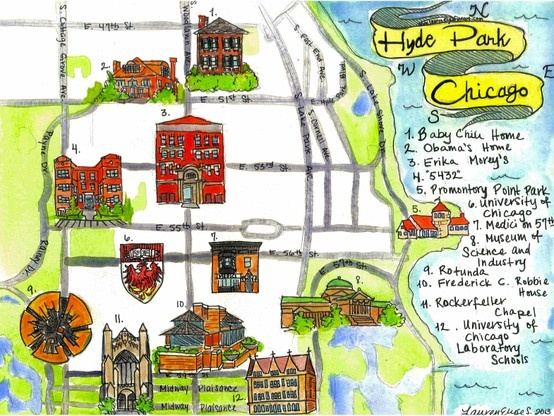 Our actual backyard had grape vines growing on the back fence. We played so many games back there.  We even buried Chicu, our first pet, a parakeet bird in our backyard. We played outside with our friends until the streetlights came on.  After we moved to 52nd Street near Dorchester, very little changed. We went shopping at the local pharmacy for treats. We were vegetarians so the famous Ribs and Bibs Take-Out was off limits to us.  However, that did not stop us from walking by and enjoying the smells, as we babysat for a family that lived right across the street from there. We learned to swim, tap dance, gymnastics and archery in classes from the YMCA, until it was torn down and replaced by commercial shops.  As we continued to grow, we went to Harper Court movie theatre for group and eventual one-on-one dates.  The streets were safe; the streets were tree lined.

I have not lived in Hyde Park since the 1990s but have been back to visit.  There is a great feeling of not only being back home, but being proud of the community in which I learned a little something about myself and a whole lot about my little world.  It set the standard for the type of neighborhood where my husband and I want to raise our daughter – in a place full of diversity, some nature, lots of culture and endless spirit.